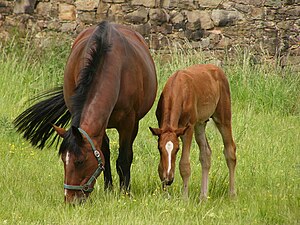 When a mare foals, her daily nutrient requirements increase significantly, nearly double that of early gestation. These nutrient needs must be met for the mare to recover from foaling stress, produce milk, and rebreed without losing body condition. Underfeeding mares during early lactation will result in lower milk production and weight loss. Early lactation weight loss, especially in mares that foal in thin condition, will likely affect the mare’s ability to raise her new foal and become pregnant again. Mares produce an average of 24 pounds (3 gallons) of milk daily during a 5-month lactation period. This represents 450 gallons or 1 3/4 tons of milk over 150 days. High producing mares yield as much as 32 pounds (4 gallons) of milk daily. Production appears to peak at 30 days and then slowly decline. Nutrient content of mares’ milk follows a more drastic downward curve. In the fourth month of lactation, a mare’s milk provides less than 30 percent of the total energy needed by her foal. Providing lactating mares with a feed such as Purina Omolene 200 or Strategy that includes added fats or oils and high quality protein can help slow the downward curve of production and improve nutrient content of the milk. This will translate into an early growth advantage for the nursing foal.In the fourth, fifth and sixth months of lactation, daily nutrient requirements of mares begin to decrease along with declining milk production, but nutrient requirements of the foals are increasing. Foals should have had access to a properly balanced foal feed, at the rate of one pound per month of age per day, beginning within a few days of foaling. Once the foal is 4 months old, it is more nutritionally accurate for the foal and more economical for the horseman to feed the foal a quality diet to meet his needs than it is to feed the mare to produce milk. Once the foal is weaned, the dry, pregnant mare can be managed as an early gestating mare once again. Through proper health care, feeding management and breeding techniques, the mare can produce a strong, healthy foal each year.

This entry was posted on Thursday, March 22nd, 2012 at 9:50 pm and is filed under Horse. You can follow any responses to this entry through the RSS 2.0 feed. Both comments and pings are currently closed.

Sign up for our FREE monthly newsletter.
Stay informed on upcoming events and store promotions.